Normal Anatomy of lip and palate

The ultimate goal in treating cleft patients is to perform reconstructive surgery that creates a normal appearance and restores function. The following will describe the normal anatomy of the lip, nose and palate.

Cupid’s bow: Is used to describe the concave or dipped portion of the vermilion border in the center of the upper lip. 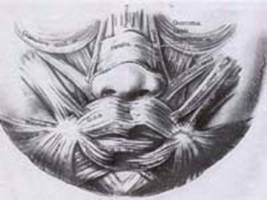 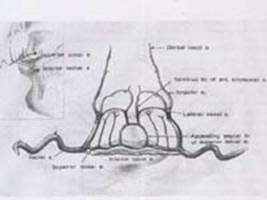 The nose can be thought of as a tent of skin supported in the center by a post of cartilage called the nasal septum which separates the nose into the right and left chambers. The nasal septum also separates the two large sinuses underlying the cheek bones which are called the maxillary sinuses.The shelves on the lateral walls of the nasal cavities are called turbinates. The nostrils include the external ports or openings as well as the skin and cartilage surrounding them. In unilateral and bilateral cleft, the nostrils are deformed.

The palate is the roof of the mouth. It consists of two portions the hard (bony) palate and the soft, muscular palate. The palate separates the nasal cavity from the oral cavity.

Behind the palate lies the pharynx or throat. The pharynx begins behind the mouth is called the oropharynx.

The soft palate performs many functions. One of its roles is to close off the back of the nose during swallowing. This keeps food and fluids from being forced through the nose when a person eats and drinks. The soft palate also plays a major role in speech. Since it acts like a veil over the pharynx, it is sometimes called the velopharynx. When the soft palate does not close completely or properly while making certain sound, the patient is said to have velopharyngeal insufficiency or velopharyngeal incompetence. This functional impairment in cleft patients is marked with a nasal quality of speech called hypernasality.