While parents often request that the cleft be repaired soon after birth and before the child goes home, surgery on the newborn is difficult because it is dangerous and usually results in a less-than-optimal repair. Therefore, most cleft lip and palate treatment centers prefer to wait to perform the initial lip repair until the child is approximately four months old. There are several reasons for this delay.

First, when the child weighs between six and eight kilograms and is healthy and vigorous, he or she is better able to tolerate the anesthesia and surgery. Second the waiting period allows ample time to thoroughly diagnose the extent and characteristics of the problem and any additional or associated problems that might be present, as well as to adequately plan an immediate and long-term course of treatment. Third, the child at four months of age is significantly larger than the newborn which facilitates the technical requirements of the surgery and results in a much better aesthetic and functional outcome.

During the period before surgery, parents are generally concerned with the problems of feeding and the issue of bonding. A number of feeding approaches are available to the parents of children with clefts. Some trial and error may be necessary in finding the method that works best for you.

Nearly all babies experience some weight fluctuation after birth. Your pediatrician can help you determine the significance of the weight fluctuation and the need to change or supplement your child’s diet. A rule of thumb that may be helpful is that a child should take about 90 to 120 ml of milk or formula in about thirty minutes of feeding.

It is myth that all babies with a cleft are unable to breast feed. While some babies may not have the ability to suckle sufficiently to breast feed, others do. If you have made a commitment to breast feed your child, the presence of the child’s cleft should not deter you from trying.

Remember that many mothers with normal children have difficulty learning to breast feed. Some of the problems all mothers must solve in learning to breast feed are how to hold the baby, how to place the breast nipple in the baby’s mouth, waiting for the breasts to become engorged with milk, knowing how much milk the child has taken etc. For the mother of a child with a cleft, it is tempting to attribute early problems to the cleft when they actually may be problems all mothers face during the learning process.

When feeding your baby, cradle him or her in your arms in a semi-sitting position with the infant’s body upright and tilted slightly backward. This position helps the child swallow and also prevents the flow of formula or milk into the nose. The child with a cleft may swallow more air when feeding than a child without a cleft. Therefore, he or she should be burped often.

Some parents worry that their infant will choke during feeding. Choking is usually caused by milk striking the back of the throat and is often the result of feeding too rapidly. Be sure the nipple opening is just large enough to allow the milk to flow freely with very little pressure against it. If milk pours out when the bottle is inverted, the opening is probably too large. 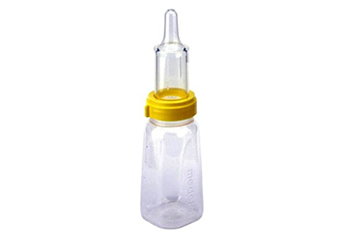 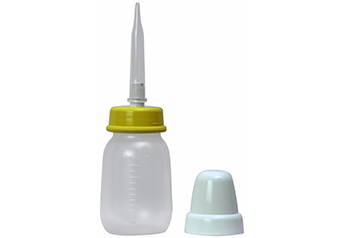 In general, your child should double his or her birth weight during the first two and a half to three months. The growth and development of your child will be monitored carefully by your pediatrician. If the baby does not gain weight as rapidly as desired, nutritional supplementation or other measures be necessary.

Whenever possible, many centers prefer to delay the initial surgical treatment of the cleft until the child weight at least six kilograms. A weight of eight kilograms is desirable before treating a child with bilateral cleft. This weight is usually achieved between three to six months of age. In general, it is desirable to perform the initial surgery before the age of six months at approximately four months of age.

Other considerations in assessing your child’s readiness for surgery are his or her general health and a hemoglobin count of greater than ten. Hemoglobin is the component of red blood cells that carries oxygen to body tissue.